Paula was out for the night so I decided…MAN FOOD! I had some cooked rice in the fridge and some veges so i went for a Thai spiced fried rice. All the usual Thai ingredients and a couple of fried eggs stirred through and topped with a soft fried egg. The veges were…red, orange, green, purply-white, two tone brown and white, the eggs were ovoid and not laid in a cage. 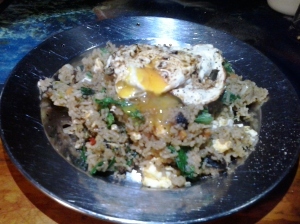 We had friends aboard for dinner the other night and I did a two course Asian meal. We had a nice prawn and fish curry for mains but the dish of the night was the Thai Lemongrass Fish soup that I made for a starter. I have a bit of an addiction to lemongrass lately can’t get enough. To the point I am now growing my own on the boat, along with three types of chilli. I made a stock by roasting the prawn shells to make a base for the soup. Lots of lemongrass some ginger and garlic, chilli, fish sauce, soy, limejuice and zest, water and S&P. Then I steamed some beautiful Red Throat Emperor and ladled over the mildly spicy lemongrass soup. Top with some freshly fried shallots and a few chilli rings and you are done. 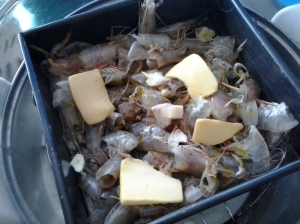 The infused stock made from the roasted prawn shells

the stock ingredients after straining

Needed a heat pick me up and have been hammering the Indian curries so I decided to have a nice hot Thom Kha Gai. Thai Coconut Chicken Soup, yum it hit the spot nicely. As with most dishes I just used the veges on hand so this had snowpeas, zuchini, carrot, mushroom and onion. The spices are chilli, ginger, garlic, lemongrass, with some dried shrimp paste, palm sugar and lime juice as well. 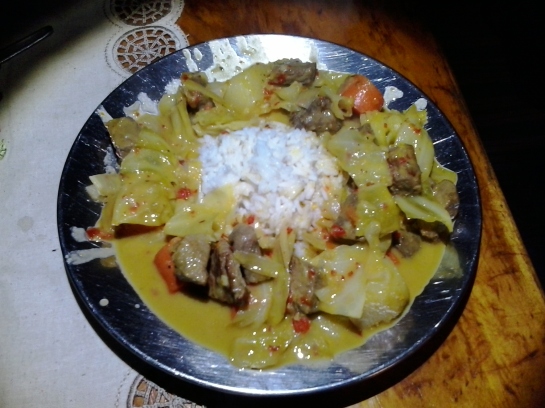 Wow that was hot! I made this yellow beef curry tonight and it was a doozy. I’m not quite sure where the heat came from. It had one large red chilli but it was full of seeds and pith, the hot parts of the chilli. It was delicious but certainly got a sweat up.

This was just a last minute decision for tea one night. Had beef mince but wanted Thai flavours so I pan fried the beef with all the usually Thai ingredients.Chilli, ginger, lemon grass, soy, palm sugar, fish sauce, lime juice, etc. Served it all with steamed rice and a fried egg.`

Just another Thai style curry. I guess its a red curry or perhaps a jungle curry depending on what you are used to. The red colour comes entirely from the chilli in the dish so beware! It is coconut milk base so that takes some heat out but it is intended to be a hot dish. You can adjust the heat to suit your tastes but remember the chilli is meant to be the star here, I use 3 red chilli’s chopped seeds and all and if the heats not there I go to my favourite, birdseye chilli to bring it up to scratch.

Oh, The meat is beef.

This is a first for me, I love Thai food but don’t often make it at home. Mainly because there is usually a good Thai take away or restaurant close to hand in most Australian towns. Where I live however that’s not the case. There is Thai restaurant within stones throw of where our boat is berthed, its a beautiful looking place and although I haven’t eaten in, I was so underwhelmed by the takeway that I rang the restaurant and asked if they were really Thai.
There are other Thai places in  town but we haven’t tried them, I hope they are good. Anyway, firsts, this is my first shot at making Thom Kha Gai or Thai Coconut Chicken Soup. Although I made it a little less spicy than typical Thai heat levels due to Paula’s chilli sensitivity and having a guest for dinner of unknown spice tolerance, it tasted pretty authentic going by the various versions we have bought. Its a bit hard to see in the pic but there is a mound of coconut rice in the centre of the dish and the soup is ladeled on and around it. I added extra sliced birdseye chilli to mine but the others decided against it, wise move, they are the chillis we grew on the boat and I’ve never had sweeter or hotter birdseye chillis before. If anyone has never tried Thai and would like a good introduction to it this dish is a good starting point, it has most of the typical Thai flavours like galangal, chilli, coconut, fish sauce, ginger, lemongrass and importantly lime. The lime juice is added after cooking just prior to serving this gives the dish a fresh citrus zing as you eat it. I also added fresh seasonal veg, this one has snowpeas, carrot, mushroom, wombok and baby corn.