We had occasion to be down in the South East corner of the state recently and also had the opportunity to go to what is considered an Iconic Queensland business Yatala Pies. They are so well-known that they have a car park to rival a theme park and when we went parking spaces were scarce. I was confident my eternal quest for a good pie was over…NUP! While they had a huge range of fillings and even the type of pastry I like they just weren’t good. Taste aside, they were roughly assembled with filling spilling out and quite un-iconic looking. With pastry much like I would get from the super market when I make pies the only salvation would have been excellent fillings but they were pretty standard fair for any I have had from the golf club canteen and servos. As I said the place was packed mid week lunchtime and is installed in local folklore but I found all three pies we tried pretty average  and we didn’t finish any of them. So the quest continues so far it’s between me and Mrs Macs Pies…There can be only one Mrs Macs, only one! 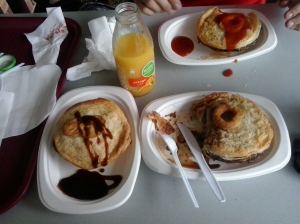